The Ant and the Dove – Story Writing

On the top of a hill, there lived a hard-working Ant. With her meagre bread and butter, she led a simple and ascetic life. She was humble and generous, and she loved helping others when in need. Due to her such morality, she also had a multitude of friends. She showed lion-like courage during storms, heavy downpours, and other difficulties in life. Not only was she courageous, but she also comforted others in their sorrow. She believed, “If you do good, good will come to you.”

One day, the Ant was in severe thirst and went in search of water. After a long time, she came across a stream. When she saw the stream, her eyes filled with joy, and she ran to have her divine nectar. She began drinking the water. But, to her misfortune, her leg accidently slipped and she fell into the stream. The speed of the stream started sweeping the Ant. She was in grave danger and cried out for help. She started chanting her last prayers, “Oh Lord of the Universe! What should I do? I have no log or leaf; no, not so much as a stick to defend myself with.”

Just then, a Dove that was sitting on a branch of a nearby tree saw the scene with his sharp eyes. “The poor Ant is drowning! I should probably do something.” He thought for a while. Then, an idea struck his mind. He quickly plucked a leaf and left it near the struggling Ant, hoping to save her life. When the Ant saw the leaf, she managed to climb onto it. She floated back to the shore unharmed.

The Ant was grateful to the Dove for saving her life, “Thank you so much, dear friend. Should you not have helped me, I would have lost my life. If need be, I will always be there to help you.”
“You do not need to thank me. You are such a petty creature! How could you be of any help to me?” the Dove replied smilingly, and flew away.

A couple of days later, the Ant was returning to her house when the sun was going down. She was exhausted from work. While walking in the forest, she noticed a hunter aiming his gun at an unaware Dove. She realized that it was her same Dove friend that had saved her from drowning. She thought to herself, “This wicked hunter is planning to kill the Dove. I shall not let him slay my dear friend.”

The Ant rushed to the hunter and bit him on the heel with all her might. “I shall do anything to save my friend.” The hunter’s toe went in pain, and so he missed the aim. The Dove, understanding what had happened, quickly managed to flee. And, the Ant also saw the Dove happily flying away, while the hunter was still screaming in sheer pain.
The Dove thought, “If you do good, good indeed comes to you.” They stayed friends forever.

If you do good, good comes to you. 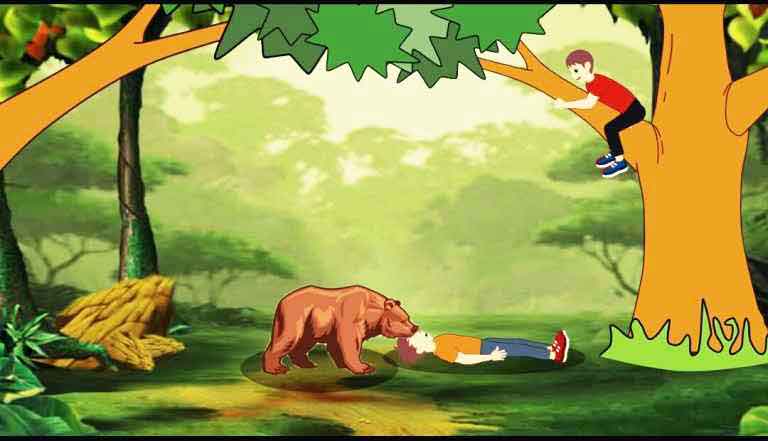 The Two Friends and the Bear – Story Writing

A rich man…had many servants……… purse with lot of money is stolen from rich man’s drawer……… rich man files a complaint in the police station ……… all the servants called ……… stick of same length given to each ……… servants told that stick of the...